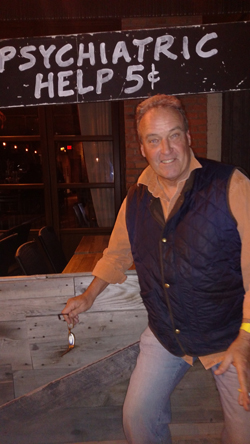 One day, a little more than three years ago, I was lying in my mother’s bed curled up in the fetal position. It would have been one thing if I were six years old and afraid to go to school. Unfortunately, that wasn’t the case. The reality was that my mother was away in England and, at age 56, I was avoiding the world and hiding in her bed!

My life had totally collapsed. True, I was the father of a wonderful nine-year-old daughter and was married to a successful professional, but I constantly compared my failure to her success. I had been hospitalized five times for refractory depression and had tried ECT three times after many trials of medication had failed. I had also been in psychotherapy with a prominent psychiatrist but saw no improvement at all. I truly felt hopeless, helpless, and worthless. All I could do was hide in shame and try to disappear.

Sometime later, my marriage broke up and at one point family members insisted I go back to the hospital. Reluctant and terrified, I finally agreed and tried another course of ECT (my fourth). Seven weeks later, I was discharged after 20 ECT treatments, only slightly improved and still scared to death. But then there was a miracle—I discovered a DBSA support group right in my own backyard! That was when my attitude and my mood began to change.

I went to my first DBSA meeting and suddenly felt understood, supported, and cared about. I didn’t feel judged, wasn’t told what to do or how to do it. I had finally come home—not to the one I grew up in but the one I had yearned for. Even more importantly, I recognized that I no longer needed to see myself as a victim, but rather as someone who had begun a journey toward recovery and might ultimately be able to connect with, help, and perhaps even inspire others.

I started by reaching out to other members of our DBSA support group. Then I decided to further my education and training and became a certified peer specialist, offering services I now offer in several settings. Beyond that, being an ambassador for DBSA has become a mission. I am also a part-time driver for Uber and have discovered that many of my passengers are not turned off by my story but instead are fascinated, respectful, and even inspired. I have made referrals to various DBSA support groups in our area to my passengers.

Recently, through my DBSA support group, I had the privilege of telling my story of pain and recovery. I spoke to psychiatrists at a distinguished medical school and also at a prestigious convention. Each of these experiences has enhanced my confidence and self-esteem.

This brings me to the present. On Saturday, June 25, I turned 60 and decided to celebrate my life and recovery by planning and organizing a birthday party for my family and friends, but primarily for members of my DBSA support group. I decided to assist DBSA in its fundraising effort as part of the Art Van Charity Challenge and found the courage and confidence to request donations in my honor—something I would never have done in the past. I’m proud to say that our small party group raised over $12,000. I’ve continued my work for DBSA with a Tribute page.

If I could turn my life around with the loving support of a DBSA support group, so can you. If you need a little encouragement, you can contact me via a letter or note to the DBSA national office and I’ll be in touch.