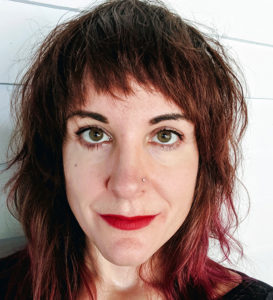 Why is spotlighting Suicide Prevention Awareness Month important? What are messages about mental health that you feel people need to hear? What about messages specifically surrounding suicidal thoughts or actions?

As a woman, I’ve had my own unique journey with bipolar and suicide. I lost my bipolar father to suicide in 1998. Growing up with a bipolar dad created my daddy issues. I experienced my first depressive episode in 2002, which was a reaction to the loss of my father. It wasn’t until after my dad was gone that I was diagnosed with the same illness he had. At the time, I worried that a bipolar diagnosis was a death sentence. I married an abusive man because of my daddy issues. My fear surrounding my diagnosis, combined with a lack of self-care and an abusive marriage, led me to feel my life would always be filled with misery. In 2012, I attempted to die by suicide. I thought things would never get better. I thankfully survived my suicide attempt and, with help, I’ve recovered. I’m now stable, happy, and successful. I haven’t just survived, I’ve thrived. I’m now a successful, Emmy-nominated film and television graphic designer with a healthy long-term relationship and a supportive network of friends and family. I’ve lived to write a memoir about my experiences. I couldn’t have done those things if I had died by suicide in 2012. Even if I hadn’t done those things, I would’ve missed out on the simple pleasures in life like watching birds fly or enjoying a cold, refreshing ice cream cone on a hot day. If I could go back and tell myself one thing, it would be: things will get better, I promise.

What would you say to someone who is currently experiencing suicidal thoughts?

I can’t believe I ever wanted to die. Sometimes it’s hard to remember what it felt like to be so hopeless I was willing to end my own life. Suicide is a permanent solution to a temporary problem. Just because one day, one week, even one year or more of your life is rough, that doesn’t mean things will be that way forever. Death is forever. And you can’t take it back.

When I tried to die by suicide in 2012, I thought my life would never get better. But I’ve since learned that just because I think something is true, doesn’t mean it is. Our thoughts can trick us. Things can and will change, and things will get better. Even if your situation doesn’t change, you can change how you cope with it. Don’t let the negative thoughts in your head be gospel truth.

Reach out for help, because help is out there. You’re not alone. No matter how isolated you feel, remember that there are people who care about you, who would miss you if you were gone. There are others who have been through what you’re going through, and they can provide support and encouragement. Get out of your bed, and out of your head. The world is a better place with you in it!

What would you say to someone who has survived a suicide attempt?

You’re very lucky. I myself survived a suicide attempt. Even though I didn’t feel lucky at the time, I now realize I got a second chance. And I’m incredibly thankful for that. Reach out for help, speak to a therapist, and attend support groups. I’ve found the DBSA support groups to be a lifeline for me. Try to find out what made you feel so hopeless that you wanted to end your own life, and work with others to find healthy coping mechanisms, so you never have to feel that way again. You can and will recover. Life is worth living, trust me.

I’m open with friends and family, because they help keep me stable and aware of my moods with their feedback. I feel I’m a rather unique case though, because my mom is a psychotherapist.

What role does the stigma surrounding suicide play in your wellness journey?

I’m not ashamed to tell my story. If someone judges me for my suicide attempt, I simply explain what it felt like, and most people tend to sympathize.

What is your history and relationship with DBSA?

I’ve been attending DBSA support groups for over 10 years. I’ve written for the DBSA Atlanta newsletter as well as DBSAlliance.org.

What do you feel that you have gotten out of being part of the DBSA community?

I’ve been attending DBSA support groups for over 10 years. I’ve gotten so much out of them. I can see all the therapists in the world, but there’s no substitute for talking with and hearing from others who know EXACTLY what I’m going through, and how it feels to be me. The support I’ve gotten from the DBSA community is invaluable and priceless to me.

What are your biggest mental health related accomplishments so far? What are you proudest to have contributed to?

Writing my book, Daddy Issues: A Bipolar Memoir, about my journey. I’m no longer ashamed of my illness, or my dad’s illness. I want to share my story so I can help and inspire people. I want everyone to understand that they’re not alone.

Government funding for mental health. I would be a proud spokesperson for the need for affordable, accessible mental health care in our communities.

Any additional thoughts you want to add?

I’m living proof that a bipolar diagnosis is not a death sentence.
My blog is located at darknessandlight.org

To learn more about Carrie’s store, check out her Life Unlimited feature.