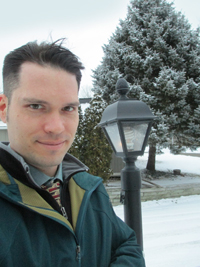 My journey with bipolar certainly has framed my adult life, but it hasn’t defined it.

Just getting a correct diagnosis was certainly half the battle early on. For me I was acutely aware that I was running away from a lot of emotional issues in high school.  Once I got to college I had insight to seek professional help in dealing with them. For better or worse, the help I received lead to a misdiagnosis of depression. I was compliant with treatment and put on a medication. Less than two months later my sleep and eating became erratic and I became hypo-manic. This episode reached its climax when I ended up walking 3 plus miles to seek treatment at a local hospital.

Over the next two years I would wrestle life at college and the harsh reality of adapting to life on medication. For me at this time, I viewed taking meds as the only way I was going to be stable enough to go to class. After two semesters and three credits to my name, it became clear that having success in the classroom was going to be an uphill climb. At the request of administrators at the university, I was told not to return until I had proven I could handle life and academics at that level. I never wanted to leave, but I knew I needed to find stability in my treatment regimen and I had to develop a whole new way of staying busy while I was getting back to the classroom. As medications allowed I read more, I exercised, I would swim at a local YMCA, and I also discovered the craft of journaling. At first I had tons of downtime, and I would spend it at a local park, just observing the world around me and not being afraid or critical of what I wrote down. Eventually I found part-time work, which was a struggle at first. I remember that I read The Power of Positive Thinking, and I would jot down affirmations and put them on 3 by 5 cards and read them on my way to work in order to keep myself focused and not get down about not being at the university.

Eventually I picked up momentum and I took classes at a community college. I kept on taking the next logical step, taking more difficult classes and transferring to the next college. In February of 2001, I covered another hurdle and I was accepted back into the University of Michigan. In August of 2004 I received a Bachelor of Science Degree. Post-University I certainly have had struggles adapting to professional life. There have been times where I have thought that the easiest way to achieve goals was to take a “shortcut” and get off my meds and be “normal” so I could be accepted by more people in general. This approach backfired every time. I now know that in order to achieve my dreams staying in treatment is an absolute necessity.

Today, I am a really creative person. I have published two poetry books, composed dozens of songs, I have dozens of paintings and ceramic pieces, and I love taking photos of nature. I have tremendous creative goals (I am in the process of writing a symphony) and I know they are achievable if I have faith in myself and patience knowing that as one of my teachers put it “life is made in inches”. Having a supportive family certainly has helped in my journey. They have helped me stay true to myself, and their value as been immeasurable. Through every turn in the process I have learned that if you are determined and you focus and commit yourself to a desired outcome, anything is achievable in life. Having a mental illness doesn’t stop you from your dreams, it provides you with an awareness that helps you become a better you.