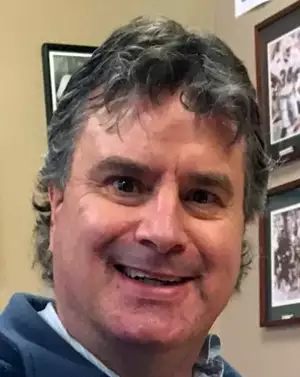 I had a great childhood, playing sports and spending time with family. We lived near the beach in the South Coast of Massachusetts and I had access to all ocean activities growing up. I made a lot of friends and was very outgoing.

I graduated high school and had been very involved socially. It wasn’t until later in college that I started to show signs of anxiety and depression. I soon began to isolate.

After college, I got married and we had two children, but the stress of full-time work and the pressure of providing for my family became too much. I struggled to have important conversations without being confrontational and angry. I began using alcohol to numb myself and found it difficult to participate in life. In 2008, I got divorced, was hospitalized twice, and spent nine months in a psychiatric halfway house. I went bankrupt during that time, and then lived in the basements of family members for three long years while I was being treated for major depressive disorder. Due to the damage done to my relationships during the years of an undiagnosed and untreated mental health condition, I remain devastated that I have not seen nor spoken to my two beloved children for over 10 years.

In 2011, I went back into the halfway house and then went homeless in 2012, walking the streets of Boston and spending my nights on the cold basement floor of a homeless shelter. Also in 2012, I was diagnosed with bipolar 1 disorder and PTSD. I was placed on the right medication and life has been a complete turnaround since then. I have my own apartment and car, and I’m grateful to have the means to meet my most important needs.

The pain of missing my children is excruciating. Not having any contact with them is a result of the divorce and an undiagnosed mental health condition.  I deal with the pain with positive distractions, meditating, working with a life coach and keeping in touch with family and friends. I have learned that psychotherapy, medication management, and having a strong support network are keys to my present-day dealings with bipolar disorder.

I have certainly had my struggles, but I feel I have overcome them through determination and perseverance. I now want to give back to others, show them that life is short and that we must be grateful for all that we do have. We need to take our mental health condition in hands and do what we can to take each day one at a time, step-by-step. My goal is to mentor people with bipolar disorder to help them avoid some of the same pain, struggle, and suffering that I have experienced. I want to live a life of joy and use my own personal experience to help others!