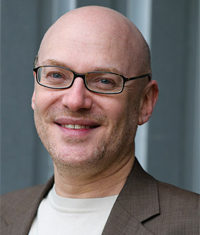 My first depression hit when I was 16. After an increasing downward spiral of drinking and abusing prescription drugs, I attempted suicide by overdosing on pills and was taken to the psych ward. I remained there for six weeks. Upon my release, I felt this crippling shame, this horrible sense of being flawed and bad. Unfortunately, there was no education at the time and no one explained to me what I was going through. My whole personality changed from that of an extrovert to that of a hermit who isolated and avoided people. Amazingly, my depression was not diagnosed at this time and I wasn’t given any medication or much help. For the next 17 years, I lived with untreated depression that colored everything in my life.

After high school, I went to music school to pursue my dream of becoming a professional guitarist, but my depression got in the way. I thought it was normal to have periods, sometimes for weeks where I felt totally down and unable to play. It was incredibly frustrating. I knew I loved the guitar, but half the time I felt like I didn’t care about anything. When things weren’t going well, I would plunge into depressions that lasted up to a year, isolating myself from everyone, sleeping most of the time, and spending hours watching TV. At 26, I hit rock bottom. Doctors told me that my music career was over due to a case of recurring tendonitis. I felt like my life was at an end. I just wanted to die.

Then something changed. Looking back, I realize that my depression temporarily lifted, and, all of a sudden, I couldn’t isolate myself anymore. I had to get involved in something. I began to do volunteer work at the Vancouver Crisis Centre and found something besides music that I loved to do and was good at. The Crisis Centre saved my life. I met all these great people who were volunteering there, and I really enjoyed being on the lines, partly because I could totally relate to many of the callers.

Eventually, they hired me to be their trainer, and I began to make use of my gift with humor by bringing in fun things to do with the volunteers during their training. Everyone loved it, and I started to get calls from some of the volunteers’ employers asking if I could come in and do workshops for their staffs. It was at this point that my career as a professional speaker on humor in the workplace was born. Today I give presentations to hundreds of organizations across North America, speaking at conferences, conventions, and corporate events.

It was also at this time that my depression was finally diagnosed. A psychiatrist I was seeing told me she thought I was depressed. At first I thought she was nuts, but she finally talked me into going on medication. It made a huge difference. Though I was more in control of my moods and ability to cope at this point in my life, the medications got me to a point where I didn’t always have to worry about coping. It’s been almost 15 years and I’m still on medication, albeit a different one, and incredibly grateful for it.

Obviously recovery involves a lot more than just taking meds. I’ve had years of therapy; I exercise regularly, eat a healthy diet, and, among other things, enjoy my career, family, and friends.

During my stint at the Crisis Centre, I completed a counselor training program and began working as a therapist in private practice in 1991. I still see clients today, although I’ve had to cut back due to my busy schedule. My entire practice has always been on sliding scale. There’s a tremendous need for counseling out there, and the sad thing is that many people can’t afford it. I think that’s just wrong. So over the years, I’ve made all sorts of deals with people so they could see me.

I also discovered stand-up comedy at this point in my life. Eventually I was asked to teach a stand-up comedy course at one of the local community colleges, and that’s what gave me the idea for Stand Up For Mental Health (SMH), my course teaching comedy to people with mental health conditions as a way of building confidence and fighting public stigma. I’d see students overcome long-standing depressions and phobias, not to mention increasing their confidence and self-esteem. There’s something incredibly healing about telling a roomful of people exactly who you are and having them laugh and cheer. I thought it would be a great idea to teach comedy to people who wanted the therapeutic benefits.

So in 2004, with no funding from anyone, I began SMH. Originally, there was only one group in Vancouver, but now I run the program in cities across North America in partnership with organizations like DBSA and NAMI. I give the classes via Skype and then fly in at the end to do shows with the comics. I’ve trained and performed with a group of comics at every DBSA conference since 2008. Hope to see you at the next one!

Please check out the Stand Up for Mental Health site. There are lots of videos of our comics to inspire you and give you a good laugh!