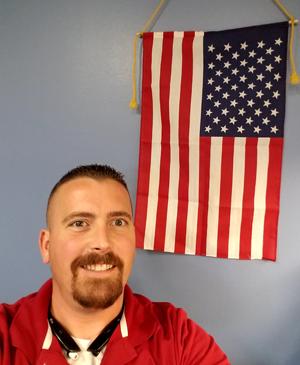 Adapt. Improvise. Overcome….  This saying was powerful while I was serving in the United States Army, and it still is. I continue to live by this saying, and it has gotten me through some tough challenges.

Having grown up a country boy in Oklahoma, I was transplanted to the city―a typical kid enjoying my youth, hanging out with my friends, and playing sports. Of course, I knew everything and was untouchable, though actually I was probably a pain in the rear for my parents! I had an older brother and my parents are still together, so life was good, except for the part where I got my General Education Diploma. That’s right, I never graduated high school―and still would not change that. In October of 2000, I joined the United States Army and graduated Soldier Leader in my cycle out of Basic Training.

I deployed to Iraq in 2003 and served my country with pride. However, when I came home, I was different. I began to push people away, avoided situations that reminded me of being in Iraq, and began to isolate myself. I was always on-guard. I had been injured in combat and was Honorably Discharged in 2004. I didn’t want this: I wanted to continue to excel and become the perfect soldier, which is what I had been trained for.

I was sinking and didn’t even care that all those around me were suffering too. My marriage was failing, and I was even pushing my kids away. I had lost all hope and was planning my own suicide. I had reached my all-time low and just wanted the memories, pain, and depression to go away.

In 2007, I walked into the VA and for two weeks I wandered the halls. I was lost, and the only people I could find to lean on were my fellow battle buddies. We knew sometimes, without even talking, what each other was going through. I was diagnosed with PTSD and depression, and a laundry list of other things both mental and physical.

I found a Marine who guided me and helped me get the help I needed. I started treatment that day―actually, I started my RECOVERY that day. I started medications and classes, and began to spend time in the world outside. I found that spending time with fellow Veterans is the most powerful thing in my recovery, and I have spent time educating later generations of soldiers on PTSD and depression. I spend my time with others, giving back, living by the creed of selfless service I was taught in the military and growing up.

With my family’s support, I was able to graduate from college in 2010 with my Associate’s Degree. I worked hard and, in 2013, became a Peer Support Specialist for the VA, which has helped me become the person I am today. I learned that I am resilient and able to get through hard times. I am a loving person and enjoy time with my family. I am passionate about giving back to my fellow Veterans and my community.

I am Bryan Rich. I adapt, improvise, and overcome. This is how I meet the challenges that life throws at me.