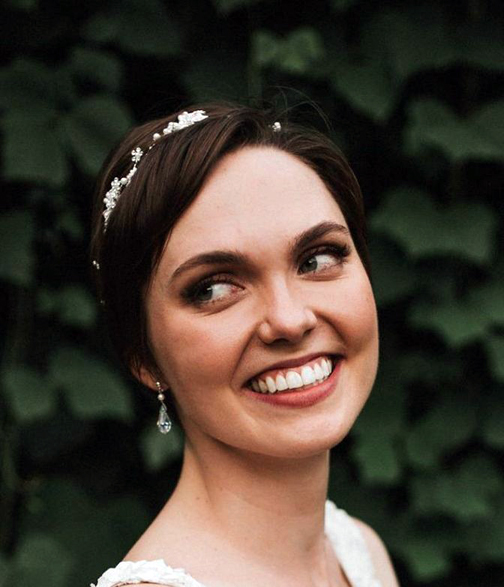 One of the most emotional moments of my life was when I decided I was staying—when I took suicide off the table. I was stable for the first time in years, and as I stood in the shower in complete darkness, hot water and shampoo running down my back, I had a moment of clarity. I realized I was going to fully experience life with all its difficulties, heartache, monotony, delight, joy, and excitement. I committed to keep myself here, and in that moment, I cried tears of sadness and relief and strength.

I was 18 years old—a freshman in college—when I was hospitalized for the first time. For a year I had been taking different antidepressants which sent me into what my doctors recognize now as a mixed state. The on-call doctor spent about 15 minutes with me, told me I had major depression, switched me to a different antidepressant, and released me after 72 hours. A year later, after several more medication changes, I was back in a different hospital.

By this time, my life had almost completely collapsed. One month I felt like the most brilliant, productive, successful person on earth. The next month I was suicidal, convinced I was worthless and pathetic. I dropped out of college and moved back home. I slept most of the day and was suicidal during my few waking hours. All of the big dreams I once had for myself seemed completely unattainable. My mom would watch me sleep and cry, wondering if I would ever recover.

Unlike the first time I was hospitalized, the doctor at the second hospital spent several hours with me. At the end of my evaluation, I was diagnosed with bipolar II disorder. I learned that the antidepressants I was taking had likely made my moods more erratic and that my desire to do everything was not just a personality trait—it was hypomania. I spent the next few days talking with other patients—some of the strongest, most resilient people I have ever met— about their experiences.

Now, after years of therapy and the right combination of medications, I have my bachelor’s degree, live in Washington, DC, and have been able to pursue a fulfilling career. I am married to my high school sweetheart, who has been with me since the beginning of this journey and has loved me even when I felt unlovable. I lead a normal life, though I am aware of my bipolar disorder every day and often struggle with my moods, even in periods of relative stability. I am hyper-vigilant about changes in my sleep patterns, which often foreshadow a change in my mood. I am not the same person I was before bipolar disorder; the ongoing journey of recovery has made me stronger than I ever could have been without this illness.

Many people don’t like the word recovery to describe relief from the symptoms of a mood disorder; they prefer remission. I understand that. Even after diagnosis, I have changed medications too many times to count. When I’m depressed or overly energized, my doctor will add a medication, and when I’ve leveled out, I’ll go back to my baseline routine.

My doctors have always celebrated my successes with an asterisk. When you live with a mood disorder, there is always the possibility of relapse in the back of your mind. There is no cure for this condition, and I will struggle with it for the rest of my life. But to me, recovery means being able to live a normal life without the weight of the asterisk attached to my chest.

One of the most important concepts I have taken from treatment is that of self-efficacy—a belief in one’s own ability to overcome challenges and succeed in the face of adversity. Managing bipolar disorder—learning to take the positive things it has to offer and succeeding in spite of the negatives—has given me more pride, strength, and self-efficacy than any other accomplishment. I have weathered the most violent storms, and I’ve seen they always pass. When darkness comes again, I will keep hanging on for that inevitable shimmering light.